My daughter runs a bit on the narrow side, so much so that typically only buttonhole elastic adjustable pants fit her. The problem? She lives in jeans and pajamas and wants to have soft pants and leggings.

The solution?- I need to make her some 🙂

We hit the thrift store together to buy clothes to deconstruct for our fabric needs. I also hit the Internet to figure out how to size things to fit her tall, skinny frame.

After a bit of pattern making, we have a finished pair of green linen pants that she loves and 2 pairs of leggings that are not yet finished.

Here she is modeling a pair of leggings pre- deconstruction, lol.

Here are some in progress and the finished pants waiting to be pressed. 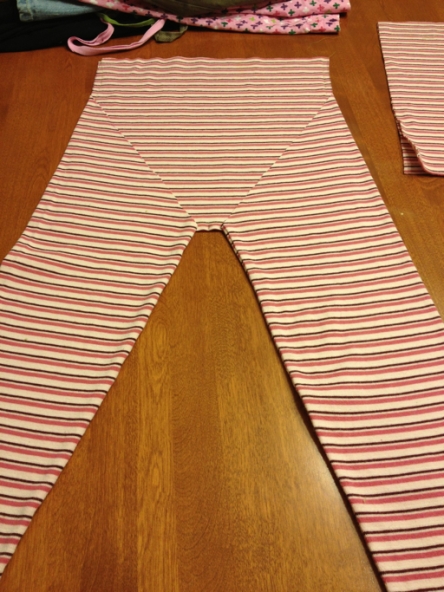 Apparently, I am out of the loop enough to not have heard of “Toms” before now. They are some kind of slip-on canvas shoe. However, the 18 inch doll world connects me with such fashionable things through my daughter. This time we found a pattern to make doll “Toms”.

They were not the easiest things to sew and it shows in the final result. My daughter likes them though and I have learned from my mistakes on this pair, so any future pair should come out better. We left off the signature slanted toe pieces because my daughter didn’t like the look of them.

The great part is that Natalie (my daughter’s doll) can stand on her own now because the shoes are flat and sturdy. 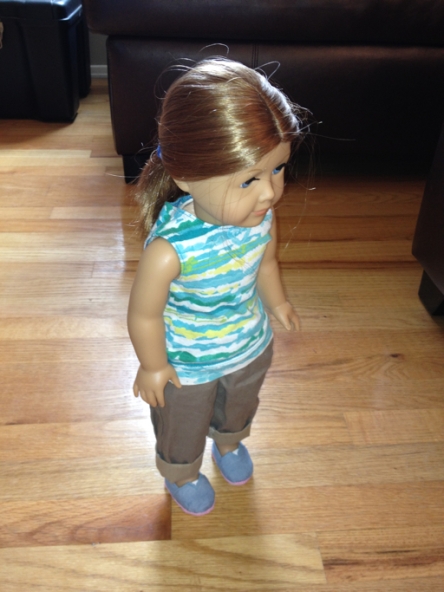 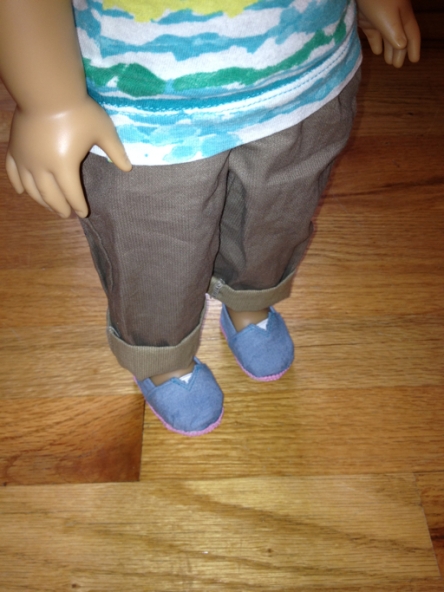 My daughter asked me to make her a hair bun maker out of fabric this past week. I made a usable version from scrap fabric and some wire. We first saw them on this blog.

My daughter asked for American Girl Doll clothes for her birthday and more specifically for the denim dress on the cover of one of the pattern books. I made the dress and then a tank top made from one of her old t-shirts. More are on the way.

I had a good, long talk with my daughter the other night about my parenting. She pointed out that I often say I will do things, but then take a long time to get around to doing them.

I decided my parenting could use some help, so I have started to ask the kids to prioritize the most important things they need from me. So far, this has been very beneficial.

My daughter picked her 3 biggest things she wanted me to tackle this week. First, we went for an eye exam for her and ordered glasses. This had been put off because she is not really struggling and life got in the way. Second, she wants me to work on installing the carpet squares in the basement as I told her she could have friends over for a dance down there. Yesterday we bought the metal ruler to make the cutting possible. Third, she wanted me to finish sewing a shirt we had started together a few months ago. Today-It is done!

I used the same approach with my son to find out what was most important to him. Last night, it was getting back to playing games together at night. We played “Apples to Apples” as a family. He also chose to do the first chapter in the programming course he asked for. Today he chose to play our homemade battle card game. We played twice and had a blast!

I am hoping that by encouraging them to tell me their priorities, I can focus on what is most important instead of getting overwhelmed with the beginnings of lots of things and leaving them feeling like I don’t listen or worse that I don’t care enough to follow through.

Following some directions I found online, I sewed a cut-off sock to make tights for my daughter’s American Girl Doll. They are a bit tight, but it worked.

I made my first doll t-shirt today from one of my daughter’s old shirts. I used my step-mom’s serger to finish the seams too. It was not as hard as I expected and it came out pretty well! 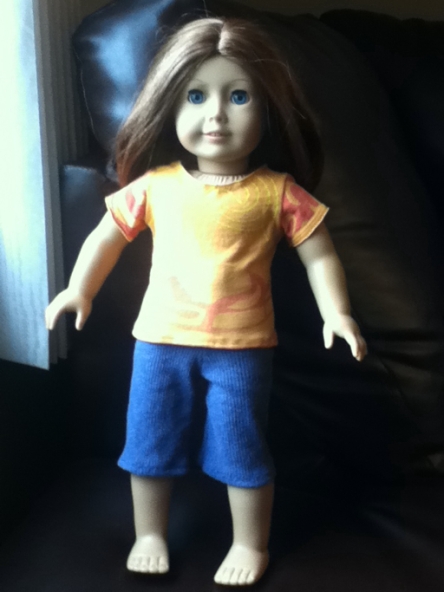 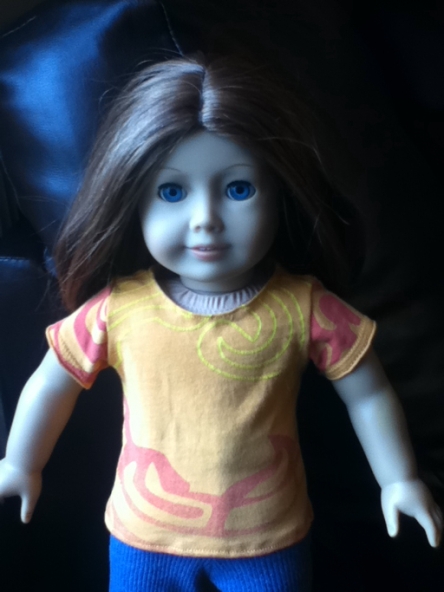